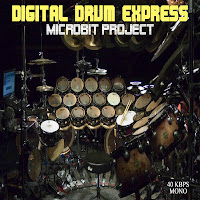 Myself, being an electronic music artist, recognize
and understand the concept of using various
aliases for new or different projects.

Well, Evgenij V. Kharitonov, who has been a crucial
part of the proc-records family, especially during this year,
has released under a handful of different aliases
(EugeneKha, YokoAbsorbing just to name a few)
and is now being featured on a new release with us
using the same name as his very own netlabel, Microbit Project!

Following an extremely rhythm-based theme,
this ep has kicked melody to the sidelines
and given percussion a chance to speak it's mind! :D
Not only that, these pieces are very fast-paced
and are somewhat relentless with their
hard-hitting bombardment of solid kicks, snares
and hi-hats.
Evgenij has shown that he is about as diverse as
artists come these days, and has proven
on many occasions (both on and off compilation releases)
that he can easily produce music to fit almost
any mood or theme.

There are some people who would probably
let their pride or ego get in thier way, which would
keep them from releasing on netlabels.
Fortunately, Evgenij is kind enough
to share his talents with the world and release
his music not only here at proc-rec, but at
many, many many other netlabels (even his own!).

Such people who contribute so positively to the netlabel
scene deserve a round of applause!
So please, join in me in giving Evgenij a standing ovation with
his latest title from a very powerful alias!