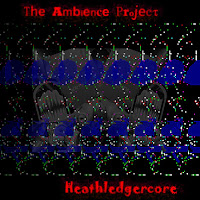 proc-rec has been moving forward at an unprecedented
rate, and from time to time it can feel a
bit overwhelming to try staying on top of things.
Making sure all of the files for each release
work correctly, maintaining some form of communication
between me and the artist just in case an issue
should arise, making sure the tags are correct, not to
mention the time spent listening to the demo's from
top to bottom!
At times, it really can stressfull...
HOWEVER, it honestly is a labor of love and
it's little ep's like this one that really
make it worthwhile!

The Ambience Project is a solo-artist project
of Alaskin based producer (David) hailing from
the city of Fairbanks.
An area known for it's chilly (sometimes harsh)
atmosphere, T.A.P's music on this album is a mirror-image
of the area, changing the visual patterns into
the ear-candy which so many of us crave! :D

A style which reminds me much of
overthruster meets GERT 3000, it would
seem that The Ambience Project is almost anything
BUT ambient.
Very haphazard drum sequences are strewn about over
harshly granulated 8-bit melodies and basslines, giving
it a very pleasant and
an unquestionably unique sound and "feel".

While this isnt The Ambience Projects first release with us
(he was on the widely sucessfull [proc200] as well)
this does happen to be his debut, non-compilation release!
It flows very smoothly from one track to the next,
has the right level of volume for the style and
definitely shows it's ability to be easily remixed for
people who like to do that sort of thing ;)

This isn't T.A.P's only release, so if you happen to
be craving more audio candy after hearing this ep
(which im positive you will!)
swing by his myspace page and find out
where you can download more shit to make you rock the
night away!!!
HE EVEN HAS STUFF RELEASED ON LOVE TORTURE RECORDS!!!
(myspace.com/theambienceproject)