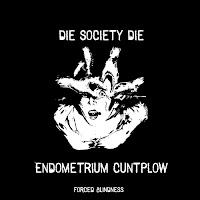 The collective conciousness on [proc209] is
a match made in heaven for noise fans!!!
The superb netlabel (Dustin Must Die)'s very own labelhead, using his
alias of Die Society Die, goes head-to-head with the
utterly astounding CEO of
Love Torture Records, Endometrium Cuntplow
on this epic ep of premium-harsh-noise!!!

Having strong roots and backgrounds
both on the netlabel scene and noise-production, these
two gents have pulled out all the stops and delivered
precisely the type of thing that not only myself, but
fans around the world have come to expect from
both dudes.
Silencing haters world-wide
by drowning out all the senseless bullshit talk from
people who have no business in the underground
through the use of brutally harsh elctro-squelch,
static, grainy texturous melodies and drones, and of course...
LOTS OF VOLUME!!!

This split-release is truly spectacular.
It features a good selection of various styled
noise tracks from both artists and maintains the interest
of people who have a keen ear for this sort of thing
(a five-minute track is an eternity in the pop-music world).
It also has an extremely high replay value.
On MULTIPLE occasions I have mentioned that there IS a
difference between good noise tracks and bad noise tracks.
It is easy to tell the difference between someone actually putting
force the effort into their art (and proc-records will only
release music when that criteria has been met!!!)

I have an un-ending amount of respect
to both of these indivduals for what they stand for and
for what they have contributed to the netlabel scene.
They talk the talk and walk the walk, and are relentless
in their efforts to not only RELEASE quality audio, but
to make it as well.

I tip my hat to you, guys!
this split release is truly sublime.