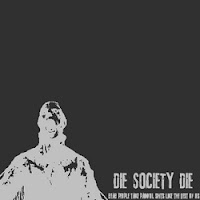 In my experience of running proc-rec, I have found
that there are an enormous amount of artists
who deal alot with the aspects of noise/experimental audio.
proc-rec alone has well over a dozen artists
who deal exclusively with such genre's.

On the flip side, I have also encountered a tremendous
amount of artists who encode their work at lower-than-normal
bitrates.
Placing zero restrictions on the material sent to us, proc-rec
has prided itself on being open to nearly all aspects of
eletronic music.
So, when i recieved this album and gave it a thorough
preview, I was immensly pleased to see hear the lowbit
encoding style joined with glitchy, harsh noise, especially
when so tactfully done!
To give a brief background about who Die Society Die is, I welcome
you to continue reading :)

DSD (for short) is the noise project of Australian-based
Mike Drever.
Mike is not only a fellow producer, he also is the label-head
of the spectacular OH!BLEEP RECORDS netlabel AND
is ou very first artist from "down under"!!!
Truly a triple shot of excitement for me :D

While there IS music to preview on his myspace page
(which I also recommend you take a look at),
this little two-track ep of extreme ruff-ness works as
a proper introduction to this fellows work.
Both pieces are hard, in your face (or ears) and play great
at both high AND low volumes (just incase there are people
nearby who may be sleeping).

With Halloween just around the corner, and the entire
world seeming to be engolfed in peril, turmoil, controversy
and yes, even mistreatment, proc-rec continues
to thrive on the underground scene!
Want to know how?
The music speaks for itself.