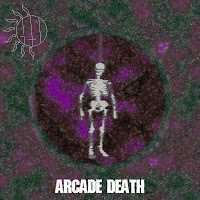 over the course of 2008, proc-records acquired a massive
amount of gorgeous noise-based audio from nearly every
corner of the planet.
It was my hope to make proc-rec one of the most dominant
forces in the netlabel scene, and having the best artists around
really helps meet that criteria.

Well, hailing from the former region of Yugoslavia is
the man known to the music scene as "GAAD" (among other aliased).
This unique genleman has allowed proc-rec to release
his utterly mind-blowing music on more
than one occasion!
Always coming up with new idea's, themes and
art, GAAD's music has easily won a place in my
heart and mind due to his phenominal creativity.

To give you a brief breakdown of this release...
it is noise.
it is ambient.
it is experimental
...and it is GOOD!!!

Now, there are some people in the scene who would argue
this statement, but in all honesty, there IS a difference
between GOOD noise and BAD noise audio.
Making good noise consists of being there with the audio
for each second.
Builfing upon ideas and themes as the tracks progress.
Paying attention to details.
Finding things within the tracks that work well af\nd things that don't.
GAAD does all of that...AND MORE, and it is noticable
on every release with us.

If you're a sucker for harsh noise like I am, then
this release is just the thing for you!