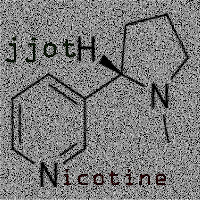 After recieving this album, I immediately went through
the proc-rec catalog to see when the last album from
jjoth here was.
TOO LONG ago, I later found.

One thing that can be said about jjoth's music, he doesnt
release often...but when he does it gets alot of attention!
A talented artist all around (both visual and audio), jjoth
brings us right back to where we last found him...
deep within the realm of noise-based audio :)

However, unlike his previous work which was done at
much lower bitrates, this album was encoded at
the astonishingly high quality bitrate of 320kbps,MP3.
This helped his audio retain much of the original
genuiness that is often over-ridden when
encoded at the lower bitrates.

Stylistically, this album is similar to jjoth's
past work.
Complete with gorgeous artwork for each track,
this is a HIGHLY avant-garde yet has many musique concrete
& even some dadaist qualities.
And, as usual, it is just long enough to satisfy your
craving for fun, yet very crazy noise and still leave you
wanting more....
MUCH more ;)


So jump on board!
If you aren't a fan yet, you soon will be!