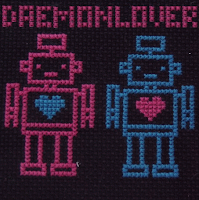 The magnificent AHTICAP is back once again
at proc-rec with an astounding release of stellar sounds
worth listening to over and over again.

Hidden behind this release is a tremendous amount of
meaning that runs deep within the hearts of many people.
The message is that of heartbreak, sadness and pure raw emotion.
As Ahticap described it to me, he was listening to the
track called "Daemon Lover" by Shocking Blue, and
upon listening to it, he felt so inspired by the piece that
he felt the need to compose his OWN track using samples
from the original track.

He later read a story of a man who returns to a long-lost
love after a certain period of time and finds that she
has moved on with her life and now has a
child with another man.
Reading that story of emotional setback pushed AHTICAP further
into his desires to produce his version of the track, but
decided to only use the sounds which came from synths and drum
computers in conjunction with the samples.

He soon asked other artists whom he felt would provide
an added flavor to the release to compose
their own version of the track and release.
As such, people like dust_in, Yonshi, and the wonderful wonderful
Razxca jumped on board.

The finished product to this adventure of sound is what you
have just downloaded and are about to thoroughly enjoy.
It gives me a great deal of pleaure to once again have AHTICAP
here at proc-rec.
I hope you enjoy this album as much as I do!!