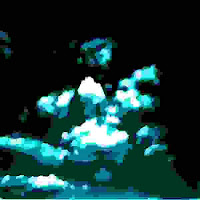 sometimes in life, its nice to just turn off the
music and let mother nature get in a few words.
In todays society, there are so many things going on:
Busses and cars driving around.
people walking and talking, laughing and crying.
Birds chirping, dogs barking.
rain falling, wind blowing.
you get the idea ;)

There were two different things that I had
given some serious thought for what to make [proc150].
The first was this type of release.
something very simple, but effective and very much an
interesting concept.

the second was a remix album, where artists could
send in a track that they had remixed whether it
be from a proc-rec artist or some other artist (so long
as they had permission to do so).
After much thinking, i decided to go ahead and make
[proc150] the "field recording" release.
I felt that it was an excellent way to ring in a whole
new chapter in proc-rec releasing and even though
I didnt recieve many tracks for either proposed
releases, this one seems quite complete nonetheless.

There is still time to send in a track for the remix
compilation if you wish.
So far we have a total of three tracks for it,
so there is still PLENTY of room to include your
remix if you haven't already.
Incidently, proc-rec will probably
be doing another release quite similar to this
in the future so if you didnt make it on time
for this release, there will be another oppurtunity
to get on the next one.

But, for now, pour yourself a nice frosty glass
of lemonade, kick back, and let planet earth
do some speaking of it's own.

extra special thanks to: