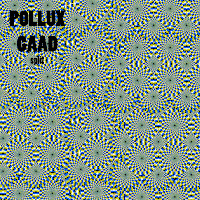 now THIS is an interesting little grouping
of two gentleman who not only make music,
but love what they do ;)
Pollux and GAAD, both of whom have released
on proc-rec numerous times before have
united forces in sound and have each laid down
some really nice pieces of noise/ambient audio.
The album is divided straight down the middle with
Pollux's music first (tracks 1-5)
followed by GAAD's tracks (6-8).


Both artists continue to demonstrate their
true passion for the genre and
represent themselves in fine form on this great
split ep :)
Pollux's sound, which traditionally has been
deeply rooted in deep ambience with a slight
inclination for heavy noise and drone continues
to be heard in his pieces.
his track "pain for a riot" is ( in my opinion)
a perfect example for soemone to
hear in an effort to become more familiar with his sound.

The second portion of this album is truly none
other than GAAD being GAAD!!
His three tracks of brutal, relentless and un-halting
noisyness seem to show a simmering anger
for this fallen world.
Letting his sound do the talking for him,
GAAD utterly demolishes everything in site with
his sound, leaving everything in complete silence
and allowing destruction and chaos to have dominion
over his half of the split.


Anyone who appreciates noise or ambient-drone in its
most raw and natural forms will surely find something
in regards to this album to enjoy completely.
This makes a great album to play at full volume!!!!!!
THE TIME HAS COME.
!!!!!!!NOISE WILL BE NOISE!!!!!!!