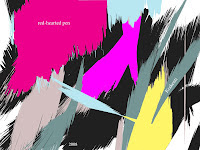 At proc-rec, we are releasing music faster than
you can say "new artist"!!
go ahead!! try !!

hahaha, okay so maybe its not THAT fast,
but lately, we have been releasing an
ample amount of fresh audi for you guys
to download, enjoy and hang on to.

Re-directing our attention back over to the country of Latvia, this
fresh new release by an artist who is sort of new
to the scene, proc-records is hoping you will
all stay tuned for this gorgeous treasure chest of
audio!

This release is a little different than anything we've encountered
before, due to a handlefull of factors, but most
importantly, the sound.

Covering a wide array of styles and genre's, Krakenti
does an excellent job representing his particular sound
by allowing us to get to know him better through
the art of music.
A common theme, however, which is apparent through
the albums entirety is the usage of slightly higher-than-normal
tempo's for what would traditionally be considered an ambient track
(listen to "ride with the wind" for an example)

While the whole album is able to comfortably stand on its own,
the track that i was most fond of was the ninth piece, titled "river".
This is an exceedingly laid-back piece and helps balance
the album out, providing a comfort zone for listeners
who just to need to sit back and chill sometimes B)

This release is a definite keeper.
Please, Join me is giving Krakenti the round of applause
that he deserves!!
You owe it to yourself to give this release every ounce of
attention you can spare!