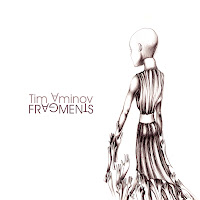 the next grand album featured
exclusively on proc comes from none other
than the fantastic electronic-country of
Russia!
The artists this time around is named
Tim Aminov, and his 'Fragments' ep
is quite calming and soothing on many weary souls
during these stressful times.


Tim has been an active producer since the age
of 13, and over the course of his
teenage and adult years, he has managed to
produce many delightful tunes.On top of all this,
he has also been actively releasing music
on his netlabel "Miniral Records"!

Listening to Tim explain this album to me
was something which I feel many artists
have experienced before.
As it is, it was not his original intention to collect
these tracks and release them as an album.
Instead, these are tracks which were complete
or mostly complete and worked well
together on an album.
Much like a puzzel has pieces, these tracks were
used as pieces to a sound-puzzle, one which is
now essentially complete (:


As you listen to this album, it is easy to not only here,
but feel the emotion as well.
Emotion which runs deep and pierces the entire
soul.
Relying more upon rhythmic melody as opposed
to percussion as way to progress the pieces
further, Tim's eloquent approach
to classical electronica fusion is
impressive to say the least.
Giving the listener a sense of abandonment at time, these
tracks also provide a comfortable reminder that
although we may feel alone at times, there
is always someone there to be a part of our life
in very profound ways.
This album has a complete runtime of twenty-minutes
and has a total of eight tracks, arranged in fantastic
order and equalized for optimal enjoyment.

I could only hope to have more music from Tim in the
future, although I also know how difficult it can
be at times to produce music and run a label as well.
In any case, this album is a perfect companion for chilly
winter evenings, looking out of your window with a
fresh cup of coffee and watching the snow fall.


(the seventh track, Eyes is probably my favorite track
on this album!!)