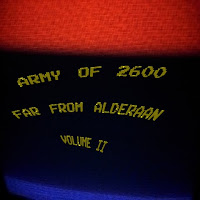 one of the surest signs that the underground
demoscene is still not only active, but thriving as well
is a having a new release from army of 2600
(xenocats) to play at maximum volume in
small, jam packed venues....or through
speakers andheadphones (:
Nebraska's very own soundboy, and an internationally
recognized sound artist through the releasing
of his material at various audio outposts, mike's
reputable solo projects have become excellent
positive and progressive ways for people to come
together for a little while and enjoy some quality music.

proc has not seen a release from AO2600 in quite some time.
As a matter of fact, the first -and last- time the alias
appeared at proc-rec was on a split release he did
with...himself as xenocats on [proc195].
Combing the best things about his styles and putting
them all onto one album seemed to be a highly appropriate thing
to do, especially during these
reputation-damaging times when so few people
seem to take their work seriously.

Throughout this entire album, one
constant theme is found...true creativity
in the most experimental and original sense of meaning.
Premium vocal samples distorted to oblivion, grinding and
pulsating white-noise deteriorate the foundation
of these pieces while an equally pleasing
array of dark melodic textures join forces with 8-bit sounding
effects and drum sequences to lay a solid foundation
for the progression of the tracks.
Along with all of this, Mike's signature "distant" sound is
noticable and help provide a feeling of detachment from
the outside world.
In a place where so much confusion
and chaos exhists FOR REAL, I find it comforting to know that
one can retreat from such a painful and harsh
reality and retreat into an equally interesting and complex
location.

hahaha, okay, I'm sure statement alone may have
been a little over a few peoples
heads, though I assure you,
such things are nothing to worry about.
At this time, the only thing you
should be thinking about
is how you are going to find reciepts
for all of the crappy cd's you bought
from best buy or target
over the years, now that you
have discovered the place
where real music and
art can be accessed.
With people like this guy around,
it's a wonder people
enjoy the new garbage coming out
on the radio on a daily basis.

without further ado, proc-rec
is pleased announce the re-semi-debut of Army Of 2600!!
(: