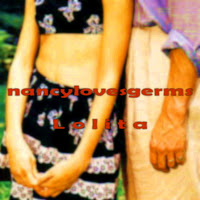 even with as chaotic and hecktic
as the holiday season is here in the States, I still
try to keep proc-records as active as possible
without it becoming to burdensome on my already
limited time.
fortunately, operating proc is nothing short of a labor
of love which allows me to be a part of something
exciting on this quickly falling netlabel scene.

now, please pay attention.
the fascinating sounds of jjoth are about to be
heard once more, although this time they are
found cased within the shell of a brand new
sub-alias called "nancylovesgerms".
While I'm unsure as to whether this alias will become his
primary name for beat-based material, it is still
a nice little addition to his already interesting catalog.

Encoded at a cbr of 8kbps, 8khz (an encoding quality from jjoth
which we have experienced on many delightful ocassions this
ep contains only one piece and has a runtime of roughly
eight minutes or so.
Even at this low low bitrate, nancylovesgerms is able
to retain an ample amount of sound.
While I wouldnt classify this track as "techno", the
beat structure and melody timing are what
one could expect from a traditional techno or house track.
However, it also does seem to have a large amount
of experimentalism running through it deeply.
Either way, genre's really aren't a concern for jjoth, and
they never have been!
a strong emphasis on sound and an even
stronger emphasis on originality is what I look forward
to the most from anything new by this subtle audio mastermind.

if you've been a fanboy of jjoth like me,
this refreshing new alias is something like a cool breeze
on a hot summer day.
I like it when people shake up the scene a little bit ;)
keep in mind, jjoth doesnt only release at proc-records.
He recently had a release on the fantastic microbit records
and also a little release on Love Torture records
back at [LTR236].

no time for reading, start downloading!!!!