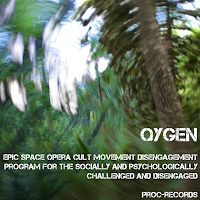 okay, so after a few days of downtime, proc-rec is
back in action with a brand flippin' new release from
a fellow american artist based out of the fine city of
Seattle, Washington.
An area known quite well for it's music scene, Seattle's
gradually surfacing (though remarkably dominant) electronic
music scene is getting alot of worldwide attention, and for
very good reasons!!

Qygen is the operating alias of one Eric Johnson.
Having been around computers and music since
a very young age, he began to play trombone at
the age of twelve.
Shortly after, he began to make electronic music and now,
at the age of eighteen, he has been effectively
producing finely crafted electronic beats for roughly
two and half years.

A very impressive introductive ep, this
album is very coherent and well-thought-out.
It has heavy roots into the early Trance scene, though
the percussion and drum sequences are undeniably
jungle and breakcore and even seems to have been
moderately mastered!


All in all, this is a solid debut release and
has a fairly high replay value.
Plus, it works well as a dance-floor smasher or simply
as something to let play in the background
while tacking daily issues ;)